Innovate Technology and Robotics Academy’s Team Robotic Boomerangs 89999A (consisting of 3 members and of Vex IQ World Championships 2016) made a trip down to Wangaratta, Victoria where the Vex Robotics Nationals were held.

There were 28 teams participating and all were school teams except for our Team Robotic Boomerangs. The team did very well and rose up to the challenges of the day and ended off in 2nd position in an alliance match with two other schools which was truly incredible and a testament to the dedication and passion of Innovate Academy’s students.

To top off the sweet end, our boys bagged the Judges’ Award for their Engineering Diary, their ability to explain their robot design and capabilities plus their overall performance.

Judges Award is presented to a team that the Judges determine is deserving of special recognition.

Considering this is our first time sending a team towards the Vex Robotics Competition, this is an excellent result! Congratulations Team Robotic Boomerangs! 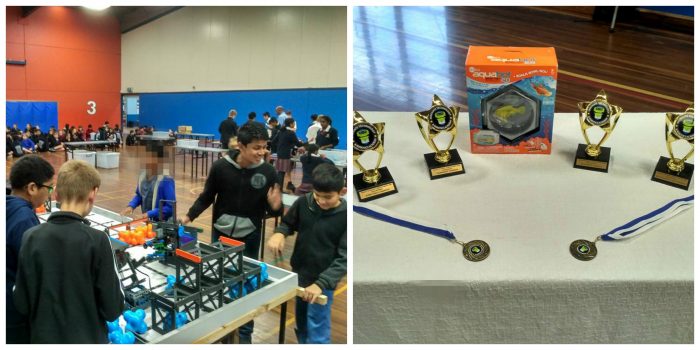 Under a minute, teams had to play the Crossover game and take as many of the Hex balls over to the other side and stash it into the racks and eventually mount the bridge and balance it together with the other team’s robot, in an alliance format.

What a game it was as teams really played their best to get the Hex balls over to the other side and many of the teams managed to get the robots to balance on the bridge in the teamwork challenge.

So proud of our students for taking on the Tournament Champion Award and Robot Skills Award. More importantly, the students who displayed graciousness and core values despite the results have done themselves and everyone proud.

It is great to win but the gracious and kind behaviour demonstrated by the teams who participated is the best and sweetest victory. #neverforgetyourcorevalues #graciousness #kindness. That is truly robotics at its best. The Mid Year Vex IQ Robotics Competition was held at Kambrya College on 16 May 2016 and what a huge success it was!

Teams from Kambrya College, Mount View Primary School and students from various other schools who are current students of Innovate Technology and Robotics Academy gathered together for the fantastic final run of the Bankshot game.

Students got very excited during the game when robots had to empty as many cutouts as possible, throw as many balls into the scoring zone and park up the ramp. The day started with every team participating in the Robot Skills Challenge and then the Teamwork Challenge.

Congratulations to our Robot Skills Champions from Innovate Tech Academy. Congratulations also to the Tournament Champions who are from Kambrya College and Innovate Technology and Robotics Academy. Our CAD Champion is Jared H! We are so happy for all the winners and more importantly every participating team – Well Done!

Nothing beats seeing teams come together and working together to achieve great things. That is the beauty of STEM education – while sharpening the engineering skills, the soft skills are sharpened for the future.

We wish all the students who participated our very best wishes for the future. Looking forward to more such events. Seriously. 🙂

The competition generates an enormous amount of dedication and passion towards robotics and STEM education. There were 1072 teams competing in the VRC in Louisville, Kentucky over the last weekend. What is even more exciting is that The Guinness Book of World Records has formally recognized that the VEX Robotics World Championships is the largest robotics competition in the World, ever! Take that!

Australians love their sports. Robotics is one of those intellectual sports which is growing in popularity and with Innovate Technology and Robotics Competitions, robotics is fast becoming an intellectual sport while promoting STEM education at the same time. There is no way teams can sit down during a robotics tournament!

If your school would like to part of this competition in Australia, please contact Gary – President of Innovate Technology & Robotics Competitions. We will help you get started for our season in 2016 / 2017.

It was truly a fun-filled and action packed day as we finished 30 rounds of qualifying games and another several rounds of robot skills.

We would like to congratulate teams who won the following:

We are excited to be preparing our team for the world championships in 2016! Go Innovate Academy!

Over the last weekend, Robotics Cub Australia organized a scrimmage in Canberra which was kindly hosted by St Clare's College. Teams from NSW and Canberra attended the event which got them learning how to set up the field and program their robots.

Teams were also building towards the Nationals which will be held later this year. The "Nothing But Net" season is exciting no doubt and we would like to thank all the teams who drove into Canberra for the event and to St Clare's College, Canberra for hosting this event.