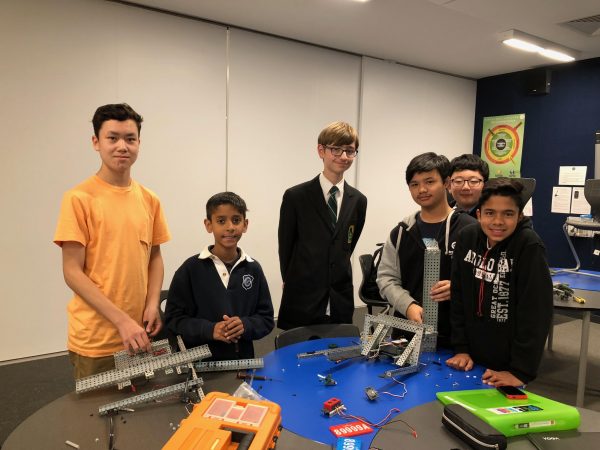 Team 89999A members have participated in various robotics tournaments through the years and now in their teen years have decided to take their skills up further by participating in the Vex Robotics Competition “In the Zone” which is Season 2017 – 2018.

The team took the Tournament Champions title (in alliance) at the “In the Zone” Season Opener on Saturday 12 August 2017! This is a good start and we will continue to press on and do our best! Our team had a great time, though it was a last minute dash to get everything ready but yes we did and yes we truly had fun! Watching other teams play and the interesting robots each team had, made it all the more eventful as our team played the best we could.

We learnt so much  during the Season Opener and each team mate had a nice drive up to Doreen, bright and early to start the day. Love our dedicated team members.

It was a challenging day but all in all, we put in our best and emerged Tournament Champions in alliance with 2 other school teams. More importantly, all students had a great day and now we have to keep working through the “In the Zone” season.

« Older Entries
Next Entries »
This website stores cookies on your computer. These cookies are used to collect information about how you interact with our website and allow us to remember you. We use this information in order to improve and customize your browsing experience and for analytics and metrics about our visitors both on this website and other media.
If you decline, your information won’t be tracked when you visit this website. A single cookie will be used in your browser to remember your preference not to be tracked. This website uses cookies to improve your experience. We'll assume you're ok with this, but you can opt-out if you wish. Cookie settingsACCEPT
Privacy & Cookies Policy